The move sparked a sell-off in government debt, with the yield on Japan’s 10-year bonds surging by as much as 0.19 percentage points to 0.44 per cent, according to Bloomberg data, its highest level since 2015. It later eased back to 0.40 per cent.

BoJ Governor Haruhiko Kuroda denied the move marked a pivot away from Japan’s ultra-loose monetary policy, saying that adjusting the yield target “does not signal the end of YCC or an exit strategy.” The BoJ kept overnight interest rates at minus 0.1 per cent, setting it apart from other key central banks that this year have raised rates rapidly in an effort to tackle high inflation.

Tohru Sasaki, head of Japan market research at JPMorgan, said the BoJ’s move was borne out of concern about the effect that volatility in global markets was having on Japanese markets. “If a market malfunction is also an important reason for today’s move, a further move may follow because just a 25 [basis point] move cannot end or improve the malfunctioning,” he added. 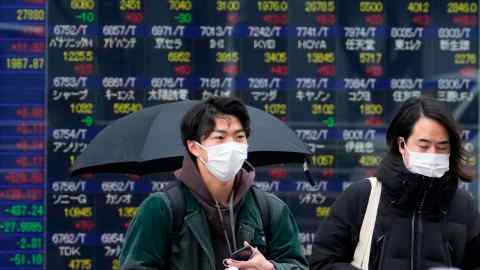 Jim Reid, head of global fundamental credit strategy at Deutsche Bank, said: “It’s important not to underestimate the impact this could have, because tighter BoJ policy would remove one of the last global anchors that’s helped to keep borrowing costs at low levels more broadly .”

Japanese equities dropped, with the Topix index down 1.5 per cent, but other major benchmarks largely shrugged off the sharp moves in bond markets.

Fredrik Repton, portfolio manager at Neuberger Berman, said the central bank’s decision would “intensify speculation that a pivot or even abandonment of the YCC could occur in the new year”.

Video: Fractured markets: the big threats to the financial system